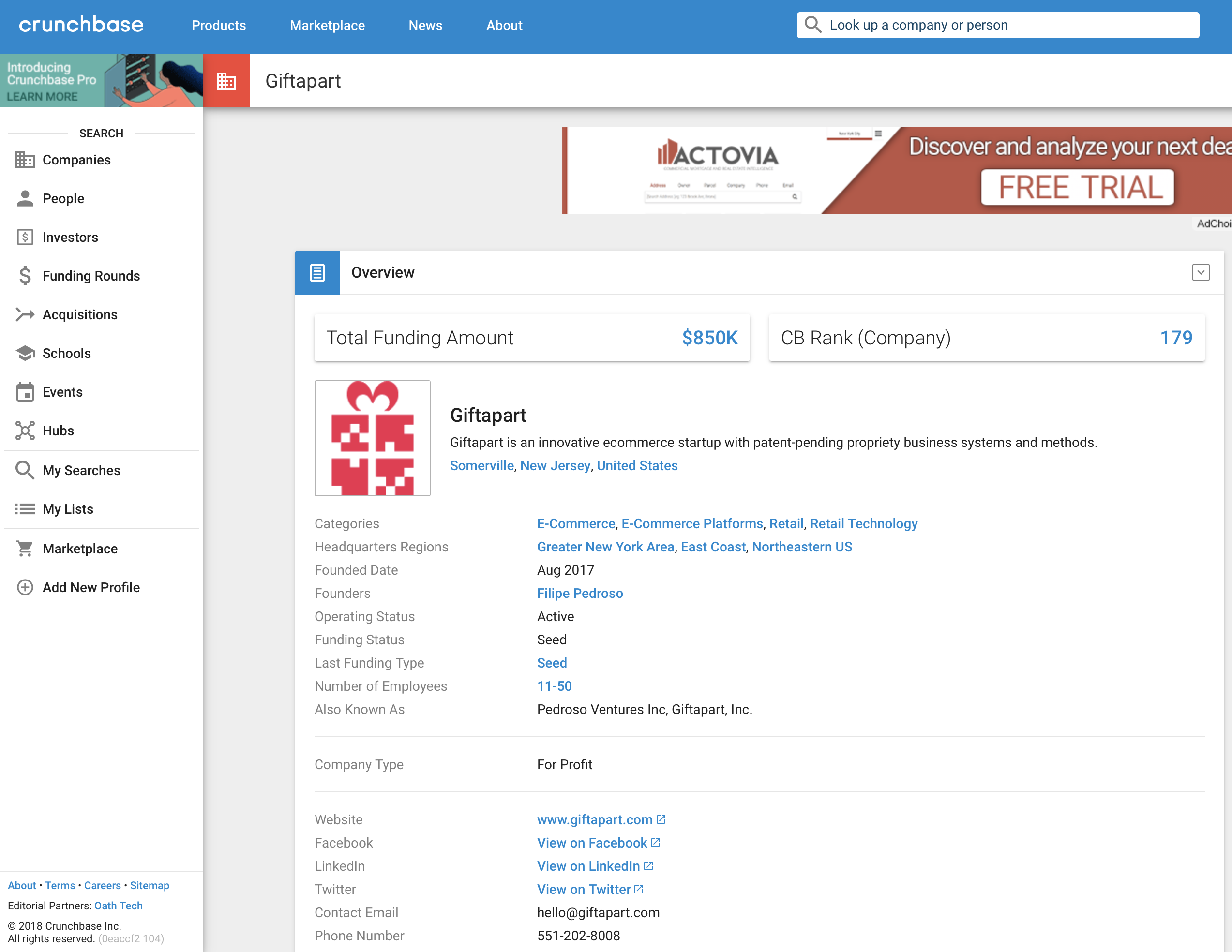 SOMERVILLE, NJ, September 4, 2018 — Giftapart Inc., the tech ecommerce startup in New Jersey that according to its CEO is “going to change the world and is creating a revolutionary new way for retailers to get, connect, and sell to a growing Gen Z and millennial shoppers,” reached the Crunchbase Rank top 200 of worldwide companies.

At the current time, Giftapart had the second highest rank of all New Jersey companies at 179, just one behind Merck & Co., the worldwide pharmaceutical company, ranked 178.

Liana V. Pedroso, Director of Corporate Communications, said, “Giftapart has been gaining tremendous interest by retailers, investors, and individuals, and this has been reflected by the company’s rank increases on Crunchbase over the past several months.”

Crunchbase, founded in 2007, is a platform for finding business information about private and public companies accessed by over 5 million users monthly, according to Wikipedia. The Crunchbase website states that it’s the leading destination for millions of users to discover industry trends, investments, and news about global companies — from startups to the Fortune 1000.

“I was recently told by an investor that our ranking on Crunchbase has been consistently increasing and that Giftapart was among a group of disruptors and established companies,” said Filipe Pedroso, the companies founder and CEO, “Our numerical ranking isn’t important, but I am pleased that there’s so much interest in our project. We are creating the coolest and funnest way to shop online, and that’s what we’re excited about here. The entire Giftapart team can’t wait to get this platform in the hands of the users. They’re going to love using Giftapart in so many different ways.”

Giftapart started development of its platform in September of 2017, and has its company headquarters in Somerville, New Jersey. “From the beginning, we were very lucky to attract top-notch coders that came to work here because they believed that we were going to change the world,” commented Filipe Pedroso, “This entire project has been custom built from the ground up here in the past year.”

The company has filed patent applications on its revolutionary new technologies. Filipe Pedroso said: “Protecting our innovative system and methods has been a priority. We have filed patent applications, and anticipate further patent claims in the near future. Giftapart is anticipated to launch in the fall, but we’re already working on 2.0 improvements and added features.”

“The Giftapart platform is the best place on earth for users to shop and do all-things-gifting, but it’s also the best place for retailers to sell their merchandize and connect with their customer base,” stated Liana Pedroso, “Giftapart provides retailers a first of its kind ecommerce marketplace, because we truly treat retailers fairly and as equal partners. There are no third-party sellers, commissions are fair, no recurring fees, and we even provide tools to increase their in-store traffic. You see, we want our retailer partners to succeed, both on Giftapart and in their brick-and-mortar stores.”

Giftapart in July announced the opening of an European division. The company anticipates launching initially in North America and Europe, with worldwide expansion. “We want everyone to benefit from using Giftapart,” said Filipe Pedroso, “We have started building European retailer partners and will be attending the Paris Retail Week in September. I’ve been impressed at how quickly retailers in Europe have been willing to signup and get onboard; it seems to me that the retail establishment in Europe is looking for technology platforms to reach more customers.”

The company anticipates a capital raise after its launch. Giftapart recently received a second seed funding from one of its current investors at a pre-money valuation of $30 million USD. “We will consider a partnership with the right investment or institutional funding organization when the time is right,” said Filipe Pedroso.

Deepak Kumar, Director of Back End Software Development, moved to the United States from England to work for Giftapart. Kumar stated, “Giftapart’s movement on Crunchbase has been amazing. I do feel however that the interest being generated on Crunchbase at the moment pales in comparison to the meteoric rise I foresee when we go live!”

Robert Dudas, Jr., Director of Cloud Operations, commented, “It's really kind of jarring to see this kind of notoriety when we aren't even live. It just goes to show that this platform is so revolutionary that it generates enough buzz to outrank companies several degrees larger than us.”

Retailers interested in finding out more about partnership opportunities can contact Giftapart at biz@giftapart.com. Inquires are accepted from established retailers.

Investors wishing to learn more about investing, can contact Giftapart at hello@giftapart.com.

Text and pictures available at: https://info.giftapart.com/news/news20180904.html.

Giftapart Inc. is developing an innovative and revolutionary new way for e-commerce. The company was established in 2017 and is headquartered in Somerville, New Jersey. The company’s software systems and methods have resulted in the filing of numerous patents. Giftapart is led by award-winning attorney and 3-time elected Councilman Filipe Pedroso, Esq., Founder, CEO and Board Member, as well as its other Board members: Liana Pedroso (a public relations and corporate communications expert with international experience and Master’s Degrees in the field from both Bashkir and New York University); Jeffrey Vanderbeek (prior owner and Chairman of the NJ Devils NHL franchise and The Prudential Center; and former Managing Partner responsible for Capital Markets at Lehman Bros.); Jeffrey Foose (Managing Partner of AERIS Capital, with extensive experience in tech startups, commodity investments, management, software development and accounting); and Henrique Pedroso (a serial entrepreneur and law school graduate, grew and led his businesses with hundreds of employees from the ground-up into successful ventures). 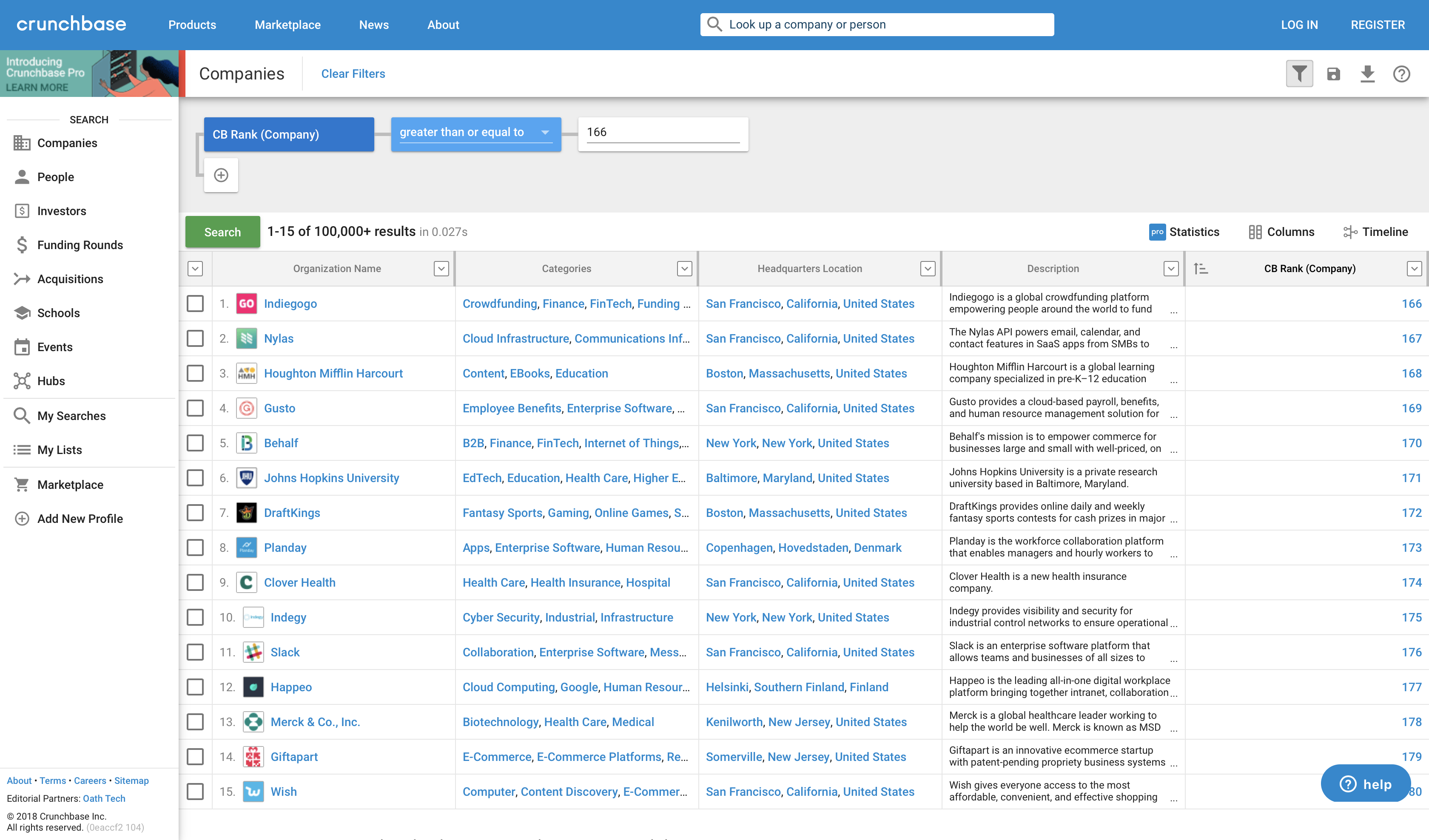